Sitting there in that wire-framed chair, wrapped in the swirls of yet another cigarette, amidst (or maybe nestled within) a full loft of expertly chosen / smartly arranged / wonderfully classic design, I listened to Olivier Renaud-Clément describe first the multi-million dollar garages with the Daytonas and 1930s Duesenbergs and Hispano-Suizas. Second, the moneyed socialites in the Côte d’Azure renting Ferraris to drive around for two weeks, to pull up at clubs in “their” Ferrari.

…that they couldn’t drive properly

He said of the rich; they buy the nice cars and they have no clue. I don’t think that he thought any less of them, just as he did not think any less of the sweeping curves of their Ferrari 365s or 1926 Bentleys. As we spoke, M. Renaud-Clément created a world of wealth and unpondered expense, where you enjoy the summer holiday driving with your companions through the sun on the fast roads of Europe. Gran turismo. And it was a world that he had an upper hand on as well, for the wives of prominent Parisian aristocrats go to the Porsche Club of France meetings to show off, and he, in his undervalued classics, just puts his foot down and drives.

One of the first things we talked about was how the word “continental” is so outdated. The idea of a pan-European jet-set glamor is a timepiece in itself, a concept that doesn’t line up with the Europe of today. It would be a lie to say that Olivier Renaud-Clément lives in a world apart, an apparition of the 1970s “look” himself. Ensconced in a zone of period design, isolated.

That is not the case, as I found sitting inside his 400i with leather and smoke and interesting console switches. I told him that from the outside, you see the car as an island of this 1970s “look”.

Inside, though, you do not feel isolated or set apart. (Actually, you just feel extremely stylish.) M. Renaud-Clément gave the sense that there is

some fantasy to it all, but that the surrounding dreams are only a small part of the experience of owning and maintaining and driving his four cars. They’re not for exhibition, or posing or speculating. M Renaud-Clément says he buys his cars to drive and to enjoy, and when he describes them, he talks about their style and their hotheadedness. The more tactile moments make up this collection.

We just finished rebuilding the engine on the 308 and now it’s crashed. Do we sell it for parts? Do we fix it?

I was driving from Basel to Belgium and it kept getting hotter, then the alternator broke, and the engine burned. Everything was fucked, the whole engine was melted. I somehow made it to the next city and took a taxi the whole rest of the way. It was very expensive.

I was in Rome in the 308 and I was pulled over by the police. I asked what was wrong and he just wanted to see it and asked what year it was.

You are driving in France and they see that you have New York plates – it’s like they have double vision, it’s great.

At times it all becomes a little abstract, and his accountant would be screaming at him and it doesn’t make sense and he just gets tired of it all. But regardless, the life with these cars is very present, very worldly and immediate – much more so than I could imagine from behind the lens.

It is not a life of leather-trimmed hermitage or automotive escapism, a runaway to a 1970s fantasy. Just gorgeous, wonderful cars. Cars like mistresses, needing to be driven, having fits for more money and more maintenance. Cars that ride firmly and are sporty, with powerful engines. 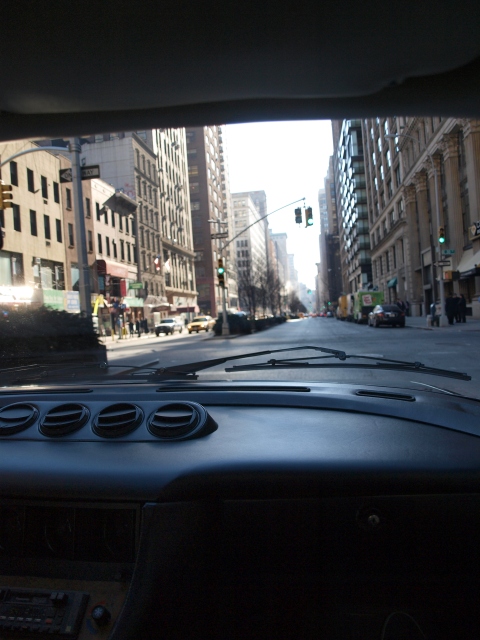 Do you see what I see? I see Park Avenue South. I see no traffic. I see one, two, three green lights. I did not turn to see his foot on the gas, because the buildings looked too good with V12 sound waves bouncing off of them.

This entry was posted in Editorials, NYC, ORCNYC. Bookmark the permalink.

1 Response to The ORC Cars, Part 5