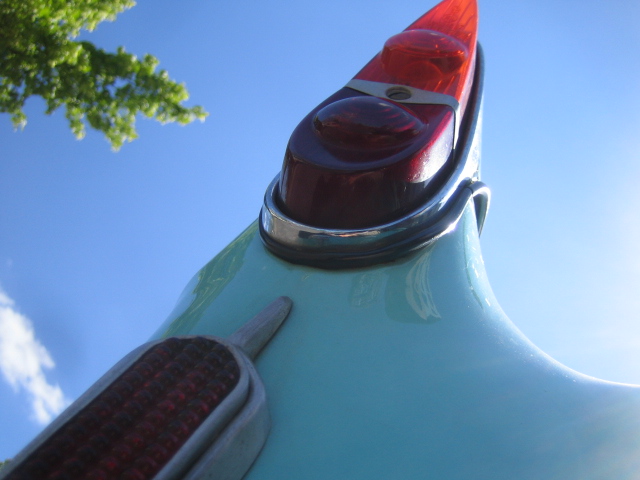 I don’t want to be any more specific on the year than that, because finding reliable information on discernible year-by-year changes is more than I can manage. I think it’s

mostly down to the placement of the mirrors, the angle of the grill, and the shape of the instrument cluster, but there might be clues in the wheels.

Autocar test, I wouldn’t have reliable information on the rest of the car either, as its weight varies by a good 30 kilos and its engine by at least 200cc across various sources. According to Autocar, this is a 2,009lb car (with 5 gal. fuel) absolutely shredding its 15in tires with 53 gross hp and 55 earth-shaking lbs-ft of torque. From rest, sixty blitzes onto the speedometer in a staggering 24.5 seconds.¹

But speed is only one automotive attraction. Cheap, open transportation has an appeal for which some will sacrifice on-the-road performance. Somehow the Autocar staff found the Felicia to be both flimsy as well as solid, lacking composure as well as sturdy. Like the Octavia the Felicia was based on, this Škoda has a separate backbone chassis which leaves the car flexing, shaking, and floating across the road. However, the Felicia also inherited some of the rally reputation of its related Octavia, coming across as tough, if rugged.²

This judgement seems very conscious of the home country of this Škoda. It is described as having a rugged, simple manner unsuited for the civilised city but in its element amongst fields and rural villages. Certainly there seems to be a great deal of late ’50s, early ’60s Czechoslovakia in this car.

It is hard for me to say just how much of the car’s character is inferred by stereotypes of the Autocar staff and how much can be attributed to engineering designed for the Czech consumer within Czech terrain.

Still, there is something very fantastic about this Felicia that has me hooked – I think it is the complete adoption of a convertible version of a utilitarian East-bloc economy car. The

paint so beautifully adopts the sky blue of 1950s Americana and under this hot Berlin sun, the slightly worn paint and chrome trim just look like evidence of a fruitful career as freewheeling 1960s motorization.

The Škoda Felicia exudes an image of post-war economic recovery. It was a small company selling to a small home market, but it somehow had the development capitol to produce this (as well as a slightly different “Super” model) low-volume non-vital addition to the lineup. That Škoda could make a business case for this sunshine car speaks volumes of the context in which it was developed.

Perhaps it is the rough charm that attracts the owner to this rare, unconventional automobile. Perhaps it is a fondness for Ostbloc style, something the Felicia has in spades (especially with that obscenely knobby shifter). Perhaps it is memories or dreams the owner has of the booming, optimistic early 1960s in Europe that bathe this Škoda in perpetual sunshine.

I somehow doubt that the owner preserves this car as a footnote in automotive history, marking the forced specialization of marginal auto manufacturers when confronted with an opening international market, filled with full-range offerings of big car companies from big economic powerhouses. As interesting a perspective that might be, and as wonderful an attraction it is to me, the car spotter, I doubt that the costs and community of classic Škoda ownership have such an academic justification.

In addition, if anyone is wondering where this car is, it’s out on Carnotstr. in Tiergarten, right in front of one of the Technische Uni’s engineering buildings.

This entry was posted in Berlin, Pictures. Bookmark the permalink.