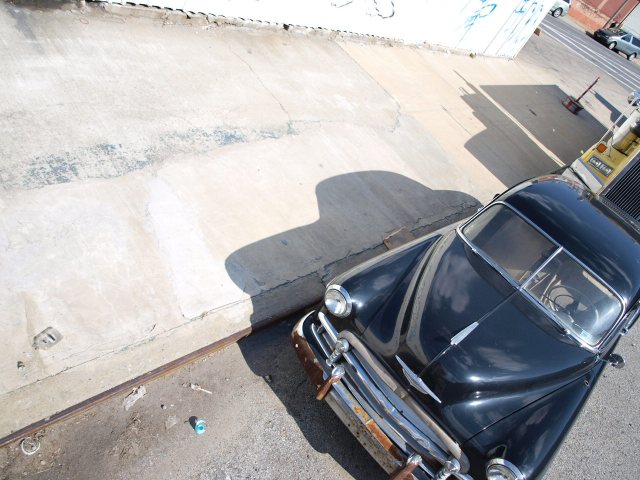 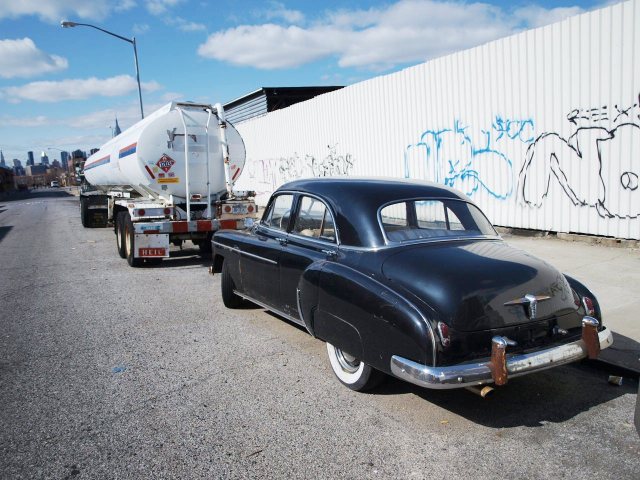 They say that the first modern car was the 1901 Mercedes. Designed as a car and not as a motorized carriage, the Maybach-designed 35hp racer was so radical a departure from contemporary automobile design that even the eyes of 2011 can recognize its innovation.

A 1901 Mercedes - the honeycomb grille cannot be seen, but note the low center of gravity

But a modern car? The 1901 Mercedes is tall, loud, rough, and exposed to a degree almost unimaginable in a car built even three decades ago, let alone today. Moreover, the Mercedes is absolutely lacking in any of the accessories or secondary functions of a car, even in its non-racing, street going guise. The sheer amount of effort required in preparing for a drive of a 1901 Mercedes in no way resembles

A 1901 Mors, note the high stance and the snaking, gilled-tube grill

the remote-starting, pushbutton immediacy that is fast becoming the staple of even the most budget automobiles.  Thick coats and goggles are not your typical driving attire and oil-splattered mechanical valve adjustments aren’t part of your routine in getting ready for a drive.

History both validates and erases the individual characteristics of the 1901 Mercedes; a historical perspective notes the radically low, strong, and wide pressed-steel frame (as opposed to the norm of high, narrow, wood/steel hybrids), while the century of automotive evolution renders the 1901 marvel nearly as obsolete as its even more old-fashioned contemporaries.¹

The 1950 Chevrolet DeLuxe (here seen with the notched “Styleline” roof) has only one mechanical marvel to its credit, the first optional automatic for a low-priced car.² It was a two-speed torque-converter gearbox (powered with gears, fluids, turbines? don’t ask me how it works, ask Aaron Severson) that couldn’t shift between low and high gears on its own, allowing for much in-gear smoothness, but very little urban performance. This car looks to have a manual transmission, but even if it had an obsolete, power-hungry vintage Powerglide, would you think any differently of this old Chevy? 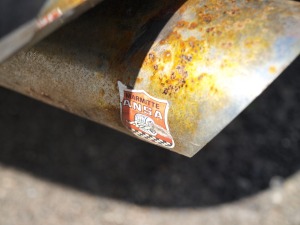 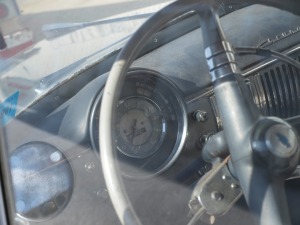 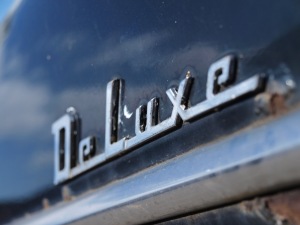 The “DeLuxe” trim cost this car’s original buyer $79 over the bottom-rung “Special”, and came with the invaluable luxuries of some stainless steel trim around the windows and along the body.³ Does this Chevrolet look any younger or any older, any more unusual for having these eye-catching trinkets? 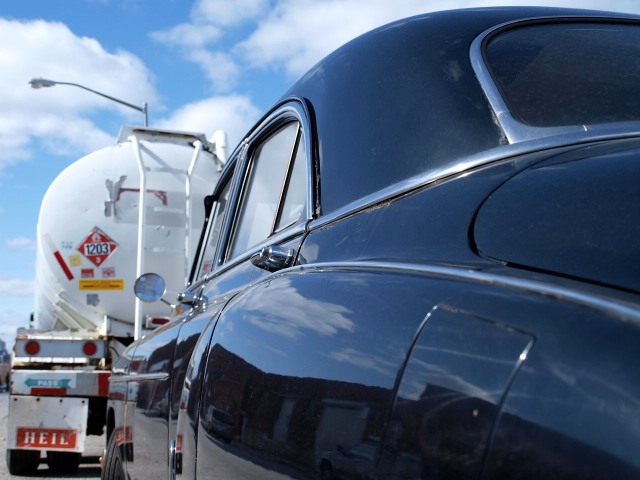 Time has abstracted its features from common recognition, erased any innovation this car had in 1950 and left only its silhouette remaining. 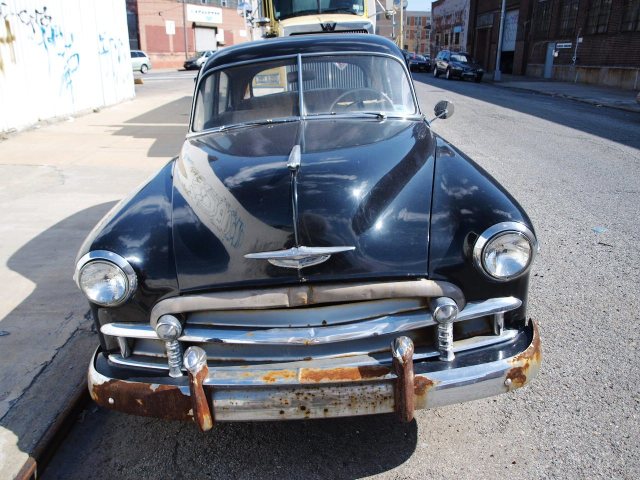 To the modern eye it looks little different from any car built from the mid 1930s on to the early 1950s. They share the same large, round headlights set high and enclosing a bulbous, vaulted hood. Gangster upright windows rise up flat above tall, narrow tires. Come across any car from this period and you know it immediately by its split windshield, know it to be slow and loud, know it as an old car, with an old-car-owner. 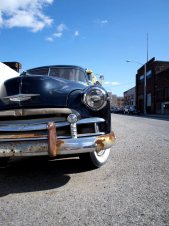 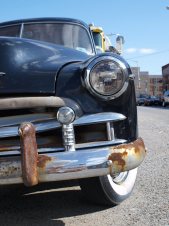 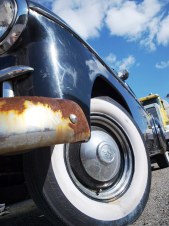 While age has brought anonymity to this Chevrolet, so too have six decades given it a new, more vibrant identity than it ever kept in 1950. 316, 412 four-door Styline DeLuxes came out of the factory in 1950 and the years have thinned their ranks.4 Not just salt and rust took these cars off the road, but inattention and undesirability. They were low-wage cars when new and they received low-wage owners; when these cars grew too expensive to maintain, few survived. The age when a car grew socially prohibitive, not just economically prohibitive, fell drastically through the 1950s and ’60s. Keeping this 1950 economy car quickly became a symbol of oldness, tightfistedness, and pertinacity.

I don’t imagine this was a terribly cool car in the 1970s, either, not yet old enough to fit into the rail-thin T-bucket chic, though I wonder if this car had another moment of glory in the backwards-looking,  ’50s-retro, hot rod ’80s.5 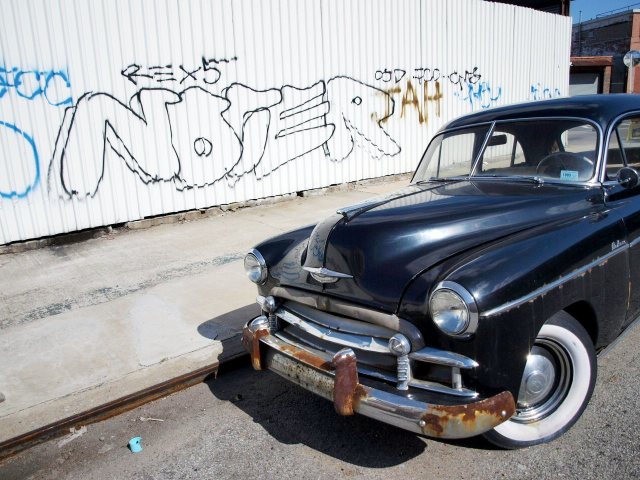 No matter what happened to it since 1950, somehow this Styline DeLuxe has found itself tucked away between two eighteen-wheelers ready to be serviced in the East Williamsburg Industrial Business Zone. We can see it now as a complete oddity, an odd relic, a piece of vintage cool. Time has made it an anonymous car of the late 1940s, but in doing so this car was gifted a rarity and an exoticism that would have been fully alien decades ago. 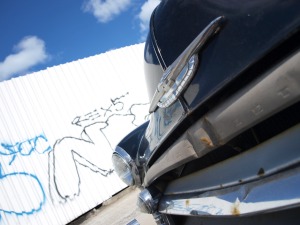 Lacking any customization, we can see how an everyday car of the 1950s looks in today’s context. Set against graffiti, eye catching it radiates with lived-in stories, all tied to that wonderfully conventional silhouette, drawn against the pavement like how kids draw cars; they all have that same indistinguishable blobby three-box shape.

It cannot run from its own shadow, it can never step out from behind and into the light, can never show off its own individual features that set it apart from its contemporary showroom rivals. But its shadow is a dynamic and shifting shadow, one that morphs with different perspectives and at different times, growing taller and taller as the sun sets on its vast, pressed-steel flanks. 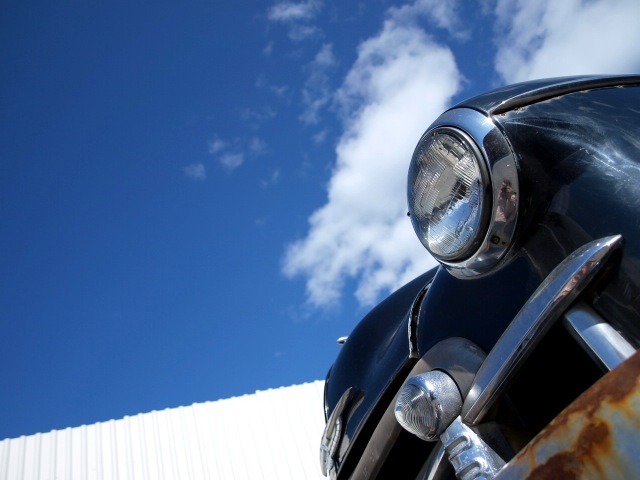 5. Might I recommend ZZ Top’s 1983 video for “Gimme All Your Lovin'” off of Eliminator?

Also, the aforementioned Ate Up With Motor article can be found here: http://ateupwithmotor.com/technology/247-hydramatic-history-part-2.html

The part 1 to said part 2 is also an excellent read, even if you’re not technically inclined like myself.

Also, for a wider discussion of what makes a modern car, you can always see some enlightened discourse over at Hooniverse.

This entry was posted in NYC, Pictures, Quotations. Bookmark the permalink.