Renault Avantime and the Banal

The other night I was walking home late through the East Village and parked all alone on Second Avenue by St. Mark’s Place was a bright red drop-top early-2000s Corvette. There wasn’t another car on the whole block. None of the people waling past payed the Corvette any mind whatsoever – they were laughing and shouting and teasing each other, but they didn’t notice this candy-colored vee-eight sports car at all. I wondered how different the Corvette would have looked sitting on some empty street in Gothenburg or on some hip corner in Bangbalore. There the Corvette might have some presence, some star power, but in the dark Manhattan night it couldn’t have been less eye-catching. 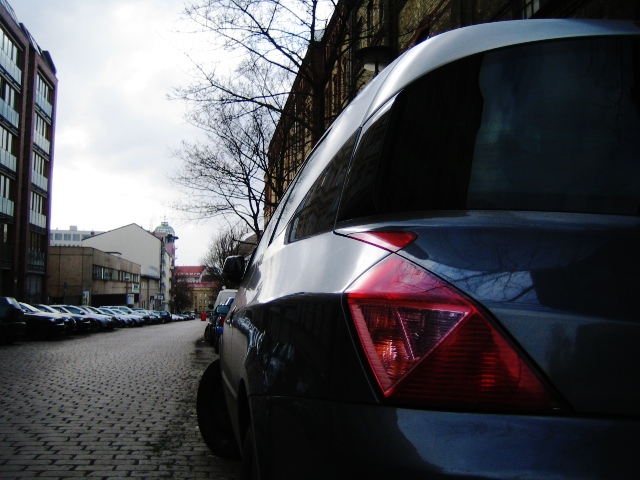 I was just looking through some of my old pictures from my year in Berlin and I found these few pictures of a Renault Avantime. Around 10,000 were built from 2001 to 2003, well short of any sales goal, but perhaps an expected volume for an attempt at making a minivan into a stylish, two-door personal car. Now, in America, spotting a Renault Avantime will make a car nut start frothing in the mouth and generally do unwise things to get a better look, as fellow Central Valleyan Davey G. Johnson demonstrated a few years ago. After reading about the Avantime years ago, I had dreamed of finding its automotive obscurity in my hometown.

But living in Berlin Mitte and often going bummeln out in Prenzlauer Berg, I got used to seeing one or two a week. What struck me as so wonderful about Berlin and what made me so nostalgic finding these pictures was the banality of something so strange and rare and geeky-cool. A two-door grand-touring minivan, the Avantime is just such an oddball car-lover’s dream. How ordinary it looked back in March 2010 against graffiti’d ex-factories and on crowded cobblestone streets. Importing these pictures back to America returned to the Renault some of its wilderness that I didn’t see on that long walk through cold, gray Berlin just over a year ago.

This entry was posted in Berlin, NYC, Pictures. Bookmark the permalink.