The owner told me that the only people in Puerto Rico who can afford to own an American car work for the government. Let’s break this down.

There are all kinds of cars that have been built in America. Ramblers, Packards, Imperials, and Moslers are all American-made automobiles. Clearly, however, when the owner of this Chevelle said “American cars” he had a very specific kind of vehicle in mind. An “American car” spans about seventeen feet, draws admiring looks from passersby, and gets about twelve miles per gallon.¹

This rather forlorn looking Chevelle fits the bill just fine, with a clean coupe body (under all the rust and dings), a vast V8 (under all those emissions controls), and acres of  built-for-cruising style.

So it’s going to be desirable, but the running costs in fuel are going to cripple it as a cheap yet stylish proposition. If you fill up your car thinking about exactly how many miles you’re going to be able to drive on $15, rather than how somebody in a Prius abstractly thinks about mpgs and the cost of a fill-up, only getting twelve miles for every gallon you buy is going to seriously cut down the distance you can regularly travel. Even short trips around town are going to be done 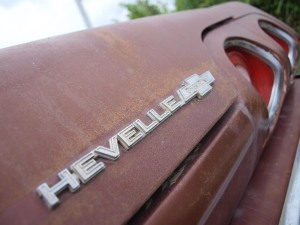 under a kind of pressure that the Corolla owner next door doesn’t feel.

But that only people working for the government own American cars – man, what a line! It expresses so clearly that for the people in Puerto Rico who might want a car with style, or would want to pay out for a piece of the automotive status/nostalgia of a US-built land-barge, the only job that is both available to this social group and steady and 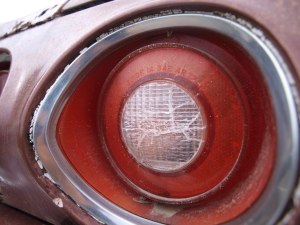 high-paying is working for the government. Put another way, government workers are the only people in Puerto Rico with the desire and the means to run such a gas-guzzling, yet stylish car.

I’m sorry if this is sounding repetitive, but it’s just such a telling quote that deserves to be fully deconstructed.

Finally, there is the instantly recognizable style of an American car in Puerto Rico. But where does this stylishness come from? Certainly the exterior styling plays a big part, as the cars issuing from Detroit’s styling studios really did have a mystique about them that is either beautiful in its own right, made stylish by the passage of time, or both. The sheer

dimensions of American cars contributes to their stylishness, and the shadow a car casts on the road and its wide bench seats inside give a unique aura to an American car.

I imagine that the origin of American cars plays into their stylishness as well, especially for older drivers. They are the cars of rich Americans, shipped in from the mainland, and have something slightly native, yet slightly alien to them at the same time. Puerto Rico is an example of classic colonialism still in effect today. It is not even a more modern, economic kind of colonialism that one might see in post-independence Africa, but straight-up, old-school imperialism. American cars, especially Chevrolets, play up their image as cars of America, cars that represent and symbolize the nation. There has to be a colonial angle to this hulking Chevelle, even if it is not immediately apparent.

So perhaps there is some overbearing symbolism in this crashed, barely-functioning 1973 Chevy, and irregardless there is certainly some truth in seeing it as a reflection of the social and economic world in which it sits, but let us see it just as a car and wonder if the owner’s quickly-proposed offer of $500 is a fair deal.

This entry was posted in Pictures, Puerto Rico. Bookmark the permalink.