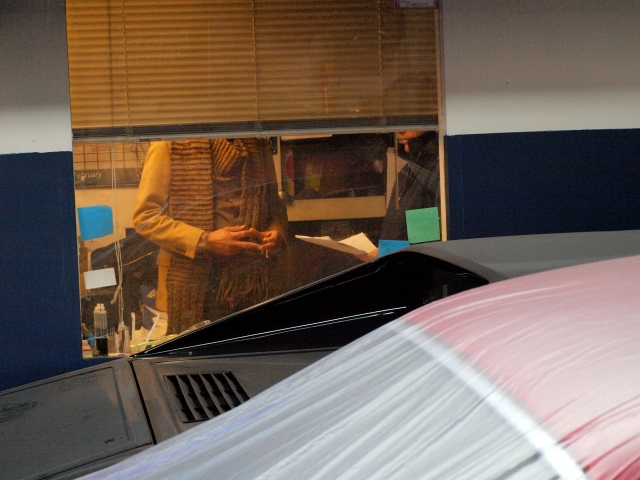 …For most people, that doesn’t result in a four-car garage of a 1979 Ferrari 308 GT4, a 1967 Maserati Ghibli, a 1979 Aston Martin Lagonda, and a ’79 Ferrari 400i. So who is this man who uses a Lagonda as an everyday car? What kind of madness made any of these cars look like sensible purchases?

He said the breakdowns were bigger in the beginning, that it stabilizes after a while. We made a stop to see the mechanic who works on all his cars. There I found out that M. Olivier Renaud-Clément’s Ghibli is just a month or two away from having been in the shop for two years now. When he bought the car, the previous owner asked if the car could be serviced before it was

shipped out from California to its new home in New York City. After waiting over half a year for the car to arrive, Olivier Renaud-Clément had his mechanic look the car over to find “it’s all fucked.” When he bought his Lagonda, again a California car, he said he got screwed. By that he meant the Aston was burned so badly it needed a new VIN, not to mentiion a complete engine rebuild. But, as M. Renaud-Clément was keen to point out, the electronics worked fine, and he’s never had any trouble with them. I expected that kind of lunacy when I first met the ORCNYC cars. I didn’t expect how sane and civilized things felt when I finally sat down to interview the man behind the collection.

I was sitting in the 400i, about to set off for Manhattan and M. Renaud-Clément pressed the little center-console mounted control to roll down his window so he could light another cigarette. Honestly, the sound the little motor made was enough to dispel any doubts about the car. It wasn’t an overstressed whine, or a straightforward hum you get in a new car. The window slid down with a determined, concerned-sounding buzz. The same exact zzzzzzzt plays in your head when you see the pod bay doors open in 2001: A Space Odyssey, muted by the interstellar vacuum. Olivier Renaud-Clément’s cars communicate those extreme, modern fantasies of the 1960s and ’70s. Again I expected that something abstract, like nostalgia for past fictions, drew M. Renaud-Clément to his cars.

But when I asked about the “look” of his cars, he didn’t have much to say. “Pointy,” he called them. Though for all of his quiet on the subject, it was plain to see an attraction to Italian design of the ’60s and ’70s. I mean, he lives in an all-white

loft filled with pieces from that era, of that style. “They’re all the same children,” he said of his cars, explaining the common kinship of his possessions. So I pressed “Are your cars just an extension of this collection, like pieces of art with four wheels?” thinking I’d struck the root of why he’d bought this group of cars, perhaps without peer in terms of collective unreliability, but once more I was mistaken.

If a car is too precious, you can’t drive it, M. Renaud-Clément was quick to say, and most people who buy nice cars just have them to show off or to store away.

-was his assessment, and it was conclusive enough for me. He buys cars because he loves driving, and these are the cars that he is attracted to. His four cars are certainly automotive classics, but they’re not “classic cars” of the traditional mold, with much lower pricetags than something else with so much style.

For each of his cars there are certainly positive qualities he can point to, especially their engines, but they seem to have as many detractors as anything else. The Lagonda definitely did not get a sugar-coated explanation. “A failure,” he said; terrible on every level, even its rear doors have some awkward quality such that most people hit their faces on the window as they’re getting out. It has a tiny trunk, especially for such a huge car, and almost all of the important mechanical components are tucked away deep behind the front wheels or behind the dashboard, making any service extremely difficult. But it’s very smooth, it has power steering, and it’s very powerful, he says. I might add that it looks insane. It certainly adds a certain something to a garage.

I thought that perhaps these cars might serve as some sort of escapist machinery to 1970s dreams, or that they might be the results of a quest for automotive strangeness, but it was the tangible aspects of the cars that M. Renaud-Clément kept returning to. The trials of maintenance, the way they feel on the road.

Still, it seemed at times that the cars got the better of him, and the constant repairs, the ceaseless series of problems make him question owning such a collection of cars. His mechanic had just finished rebuilding the engine on his 308GT4 when he lost control after hitting a pothole, smashing the front. The Lagonda cost him four times as much as the purchase price just to get it on the road, and I didn’t ask how much it has cost him since then.

You get tired of it. 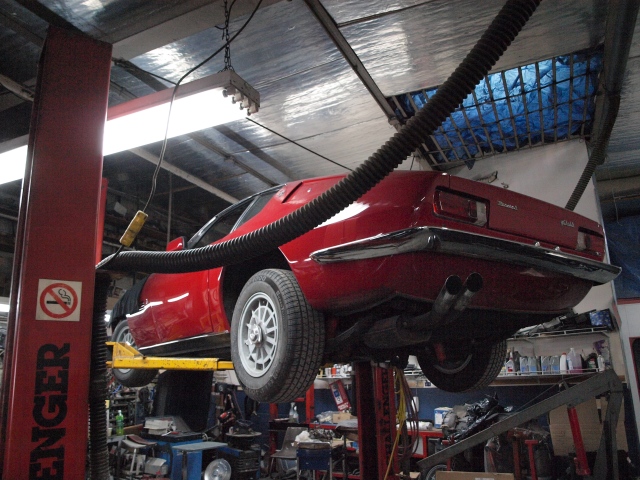 That’s not to say that these cars are the end of the road for Olivier Renaud-Clément, and he says he sill considers Maserati Khamsins, 1990s Bentley Azures, Lamborghini 400GTsand LM002s.

The Lamborghini LM002 – it’s beyond anything. I mean, drive by and it’s like, you think you’re cool? Forget it.

In another bright moment, when I asked how people react to him driving them around Manhattan as daily drivers, he told me that no matter what you hear, women love getting picked up on the street. Not by assholes overrevving attention-grabbing rented exotics, or guys calling out tired pick up lines. These cars, though, radiate some kind of aura of half-grounded space fantasy, or star-bound jet set glamor that you draw closer to, hoping that some will rub off. 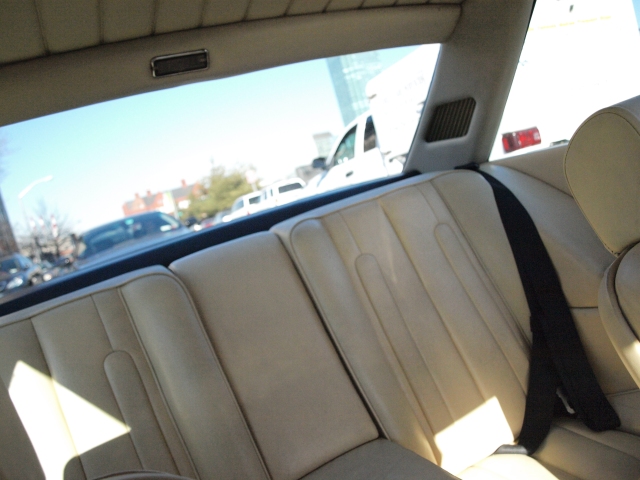 My favorite of his cars used to be the Lagonda, a car I’d spotted for the past few years here and there across Lower Manhattan -my white whale – but now I’ve grown to prefer the 400i. It is by no means as sporty or as alluring as the Ghibli or the 308GT4, nor is it as wild or extreme as the Aston, but it has a completely modern straight-lined appearance, rich, olfactory seating for four (with plenty of room for luggage), and a V12 up front.

The engine almost has an out-of-tune, uneven quality at idle, but it’s really a heaving, organic pulse that thrums up in oscillating waves as it works its way through the gears. Ardent and casual Ferraristi alike do not remember the 400i fondly, and with some good reason. It is as if someone looked at a 365 and set out to make every aspect of the car quantifiably worse. Flatten out the rolling curves, take the carburettors off the engine, and strip away that ever-praised 1960s sheen. Olivier Renaud-Clément attested to how difficult it is to sell any of these cars – nobody seems to want them. But I tried taking notes while in the car and I could never finish a sentence on the page; there was always another detail to distract me, there was always another turn that left me struck at how the car planted itself on the pavement. The ORC cars are fascinating, engaging objects, but as cars, they far outdo any static attraction they might have.

If you are thinking to yourself that you’ve just read about the owner of a dream-worthy set of cars who considers selling any one of them and you’d like to make an offer, Olivier Renaud-Clément had this to say:

Lots of people approach me about my cars, ask me what it is or say they’d like to buy it. They always send me e-mails, but they never come through. It’s like going up to a prostitute but not going through with it. “So, what you’re say is, you should just buy the prostitute?” Yes! Of course!

“You can get to be alone after she leaves, anyway”

This entry was posted in Editorials, NYC, ORCNYC. Bookmark the permalink.